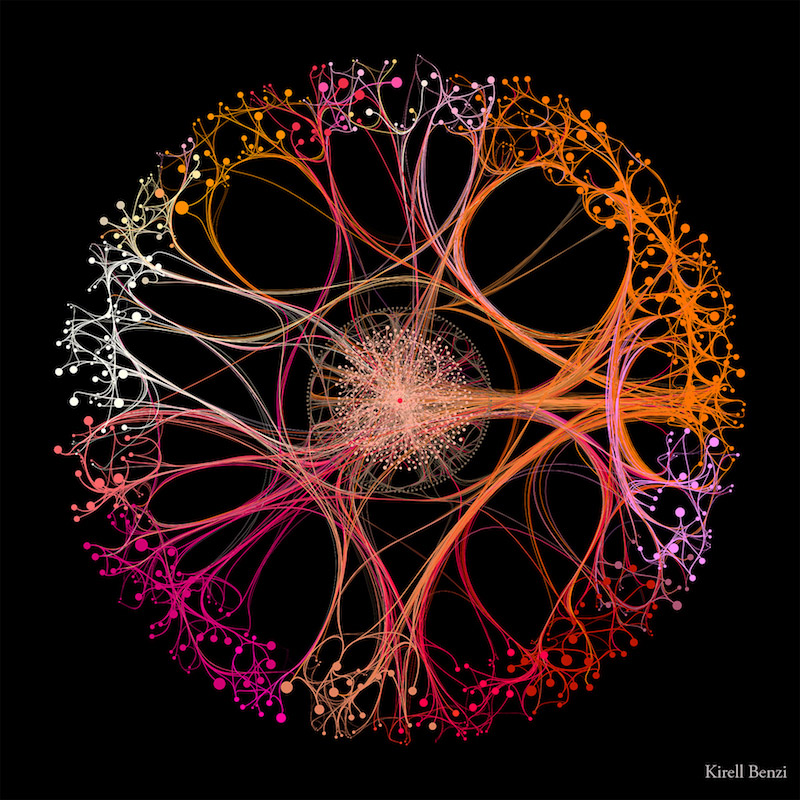 Johnny Hallyday is probably the most famous singer of France with 1163 songs interpreted in 50 years. This polyvalent artist, not limited by any style or country, brought joy to millions and even earn the title “The Youth Idol” in the media with his numerous hits.
To pay his respects to Johnny, the French Elvis, and his fulfilling career, Kirell Benzi created this artwork based on Johnny’s collaborations with other members of the SACEM (The Society of Authors, composers, and music editors). Thanks to these 1084 collaborations, here shown as points, Johnny has become the most famous rocker in France. Interestingly, one of the nodes is Erick Benzi, Kirell’s father, who worked with Johnny Hallyday on the album Lorada as musician, composer, and producer. When he was 8, Kirell had the chance to meet Johnny. With his recent passing, the recollection of these memories was most certainly the origin of this artwork.
In the artwork, the different communities of right holders brought together by Johnny are distinguished by their positions, their connections as well as their colors. The diameter of each point illustrates the importance of each SACEM member in his community with Jean-Jacques Goldman, Michel Berger, or Pascal Obispo, for the singer-composers.